This post may contain affiliate links. This means that at no additional cost to you, I will earn a commission if you decide to click through one of my links and make a purchase. Please read the disclaimer for more details.

Everyone is raving about The Witcher. But why? Well, perhaps because the world of the witcher is amazing! I know this because I have played the PC game, watched the t.v. show, and now, I have started reading the books. Today I am going to go in-depth about the Blood of Elves which is just one of many of the books in the Witcher series. I’m going to tell you what the book is about, what the correct order of the books is, and list out the pros and cons of this book. 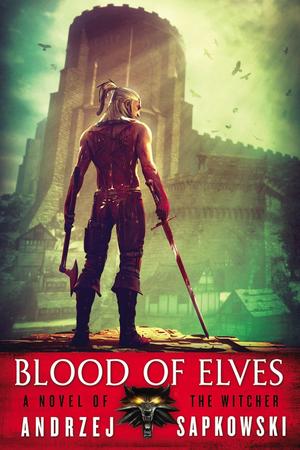 The Witcher, Geralt of Rivia, becomes the guardian of Ciri, surviving heiress of a bloody revolution and prophesied savior of the world, in the first novel of the New York Times bestselling series that inspired the Netflix show and the hit video games.For over a century, humans, dwarves, gnomes, and elves have lived together in relative peace. But times have changed, the uneasy peace is over, and now the races are fighting once again. The only good elf, it seems, is a dead elf.Geralt of Rivia, the cunning assassin known as The Witcher, has been waiting for the birth of a prophesied child. This child has the power to change the world — for good, or for evil.As the threat of war hangs over the land and the child is hunted for her extraordinary powers, it will become Geralt’s responsibility to protect them all. And the Witcher never accepts defeat. The summary is from Amazon.

While labeled as the first book, the Blood of Elves is not actually the first in the 8 novel series. It is merely the first of the main story. Had I paid attention I would have realized this.

It’s actually the first of the 8 that I read. Now that I know the true order of the books, I am going to backtrack and will read them in the correct order. If you would like to do the same I will spare you from making the same mistake. The order is as follows: 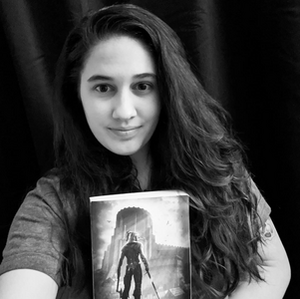 How To Integrate Yourself Into The Witcher World

The witcher world is not something to be taken lightly. There is so much complexity to it. To save you the headache, I’m going to tell you how to integrate yourself into it by explaining my journey.

I first found out about the Witcher through the PC Witcher 3 game. My goal was to find a story-like game to play because those are the most fun to me. I came across a game called Witcher 3 and luckily it was on sale. The video’s looking incredible and it sounded like the perfect game for me when I read the description. I started playing immediately. The game had me hooked, I played every single day for at least an hour. I loved the story, the fights, the monsters, basically all of it.

Then, I found out there were books and my bookworm heart jumped for joy! I immediately went and put every single book on my Christmas wish list.

Then, as if my world couldn’t get any better, I found out a t.v. show was going to be out on Netflix. I wanted to read the books before the show came out but unfortunately, I wasn’t able to get the books until after I had watched the show. I was surprised about how much I knew though. The show came out, I binge-watched it, and told my boyfriend all the nitty-gritty details (by the way I can’t wait for the next season).

Lastly in my witcher journey, I got the books. I immediately jumped into reading the Blood of Elves full of anticipation. Perhaps my anticipation is what led me not to pay attention to which book was actually the first one. Don’t make my mistake, get the books in the right order!

So, I say all of this to tell you that you want to start by either reading the books or playing the game first. I know your natural reaction might be to watch the show, but this could be a mistake. I have found that people (with no real prior knowledge of this crazy world) who watched the show first, were confused about what was going on. The show didn’t make a whole lot of sense to newcomers because it jumps around in time. If you read the books or even play the game then you will know enough to understand the show.

The Good and the Bad

To be neutral does not mean to be indifferent or insensitive. You don’t have to kill your feelings. It’s enough to kill hatred within yourself.

Now onto discussing the book itself! If you are a fan of the video-games like myself or of the show on Netflix then you will not be disappointed by this book. If you have never heard of the Witcher then prepare to be thrown into a world just like ours of the medieval times but also with witchers, sorceresses, and fairy tale creatures.

The Blood of Elves Summary

Geralt, Ciri, Yennefer, and Triss are all main characters in the series. All the species of this world (humans, elves, dwarves, etc.) have lived in peace for a very long time but that has come to an end and talk of war is across all the land and battle preparations are being made and carried out.

Geralt is a Witcher and is tied to a girl named Ciri by what is called the Law of Surprise. She is a very important piece to the puzzle and because of this, she is hunted. Luckily she is under the protection of many including the sorceress, Triss, who in this novel helps her to hone her powers.

The story begins in the throes of the Witcher world in the midst of a battle. Because of this, I recommend reading The Last Wish and Sword of Destiny first as I am doing. This is especially recommended if you have not played the games or watched the shows. You can read the Blood of Elves first, but you will want prior knowledge of the Witcher. Otherwise, it will just be confusing.

While the beginning is action-heavy, the Blood of Elves is not overall action-packed. There is more talk of war and politics than I had expected. It makes me wonder if the politics in our world are nearly as interesting as it is portrayed in this book.

The author did not shy away from the realities of war. He makes you really think about the motives of each kingdom and whose side you’d be on if you were in that world. Every character has an opinion on the battles, rulers, and the war, so you must too.

But who is right? While few moments are present, the fights and creatures(or creature) that are described is done so wonderfully. I felt that the descriptions of the scenes were so detailed that I could picture exactly what it would look like.

There was an impressive amount of characters in the Blood of Elves. I found the book to be complex because of how many main and side characters there were. You will have to pay quite a bit of attention to the story. The plus to this is that even though there are a lot of characters, they all play an essential role in the story.

I did find something surprising when it came to the characters. Geralt for example is not the main part of this book. While mentioned throughout the whole book he is not in every scene or even in every chapter.

When in the story, I was shocked by his personality as it does not reflect his character in the video-games and TV show. He is much more opinionated and talkative in the book. What does remain the same across all three versions is his smart-aleck responses.

He is very witty and quick on his feet. One of my favorite scenes in the book was when he had a battle of wits with a scholar. I only wish I could be as clever as he is in the book.

Ciri is in the majority of the book. While a man did write the book, he was able to capture the thoughts and feelings of a young teenage girl. Ciri was not overly mature for her age.

Even though the book states her age, I could have pegged her as a 13-year-old girl. She has seen and been through quite a bit but she lets her mouth speak before she thinks at times and can be overeager which gets her into some trouble. I truly enjoyed the efforts put into each character.

Complex Read…But Worth It

The book is in the third person so it is not from the point of view of a character in the series. Imagine that you are next to all the characters and watching them interact but they don’t know you are there and you can’t be hurt. That is what it’s like reading the book.

There are only 7 chapters to this book so they are rather long chapters. I consider this to be a downside because I prefer shorter chapters so that when I want to stop reading, it’s not in the middle of a scene. However, this did not stop me from finishing the book in a week.

As I was reading the last chapter and getting to the last 10 pages I began to wonder how it was going to end. It’s really a rather peaceful chapter so I couldn’t imagine how it could possibly lead to the next book(The Time of Contempt).

I underestimated the author, Andrzej Sapkowski. He left me in suspense and I was curious about what will happen next. This is the first book I have ever read by him. Andrzej Sapkowski impressed me and I am eager to read the rest of this series. Expect reviews soon!

After finishing the book I would give it 4 out of 5 stars as I found both pros and cons to it.

Check out another of my other book reviews here! Anyone who enjoys sword fighting, the medieval time period, subtle hints of romance, adventure, and thrill-seeking will enjoy this read. If you are a Witcher fan already then I promise you won’t be disappointed. Once again though, I must reiterate, I highly recommend reading these books in order.

Get The Blood Of Elves Book Now!

What’s your favorite book series? If you could go back in time, where would you go?

12 thoughts on “The Blood of Elves: What You Need To Know”