Welcome to another book review! Keeping along with the upcoming fall season, I have read another ghost-related story. It isn’t a typical scary ghost story though (check out my book review of The Patience of a Dead Man if you want something scary). So keep reading to see what it’s about! Today I am going over the book, who the author is, and my thoughts on Edge of Perception. 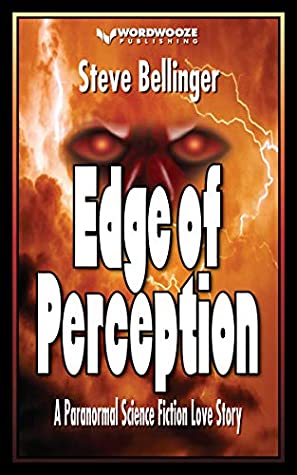 Ron Lewis is a firm believer in science. However, a curse that was placed on his family during the slavery days continues to plague since his early childhood. Ron was born in the 1960s and faces many struggles on top of the paranormal activity. Just when Ron thinks he has found peace, a tragedy strikes turning his world upside down. Soon after, a once in a lifetime opportunity allows Ron to use science to face his demons of the past which unleashes even more chaos. The question is, will he find peace amidst the chaos and will he finally be able to put his demons to rest?

Steve Bellinger fell in love with science fiction with the first Tom Swift book that he read as a child. When his mom, who worked for a printing company brought home an Isaac Asimov novel, he was blown away by it and at the tender age of 13 decided he wanted to write, creating home-made comic books and handwritten manuscripts in wire-bound notebooks.

As a young adult, he found he just couldn’t get his stories published anywhere, so he combined two of his passions, writing, and radio, and created several original radios dramas, producing them in his own home-made recording studio. Through the years he’s written content for websites, articles for local newspapers, and even the Junior High Sunday School booklets for the AME Church, but it wasn’t until he turned 65 that he realized his dream of having a science fiction novel published, The
Chronocar.

So, remember, it’s never too late! Steve’s affection for science and science fiction continues. He is a lifelong fan of Star Trek (he owns two uniforms) and Dr. Who (yes, he has his own 12-foot long scarf).

He’s met many of the stars of his favorite programs at conventions, including Nichelle Nichols (Lt. Uhura), James Doohan (Scotty) from the original Star Trek series, and even Tom Baker, the most famous Dr. Who of them all. But the list of celebrities Steve has shaken hands with also includes real-life heroes like NASA space shuttle astronaut Joan Higgenbotham and Buzz Aldrin, the second man to walk on the moon.
Steve lives in the Lincoln Park community in Chicago, Illinois, with his wife, Donna.

Initial Thoughts on the Edge of Perception

When I first started reading the book I thought it was okay. I don’t read a lot of paranormal or sci-fi as they aren’t one of my top favorite genres to read. This doesn’t stop me from reading them of course. As I read the beginning I wondered if I would like where the story was going. Honestly, what kept me reading was that I didn’t know where it was going. My curiosity for what this story held is what pushed me forward.

So, what’s interesting about the Edge of Perception is that is labeled as both a paranormal story and a sci-fi story. After reading it I would say I agree. There is a mix of ghosts and science throughout the whole book. This isn’t a typical ghost story though. It isn’t meant to be scary or creepy. The Edge of Perception follows almost all of Ron’s life. The paranormal side of the story mostly looms in the background.

I initially thought that Ron’s whole focus might be to get rid of the family curse. The curse produced a demon called the Tokoloshe which has threatened his family for generations. It was his turn to deal with the demon. So, I naturally thought he would do everything in his power to get rid of it.

With any life story, there is bound to be romance. The Edge of Perception novel is no exception. Ron’s romance is not at the forefront of the story but it does play a role. One problem I had was with one of Ron’s first relationships. I won’t give too much detail for the sake of not wanting to give any spoilers away. But, I felt there was almost too much importance placed on one relationship.

To me, the woman did not have a large enough or an impactful enough role in the story to hold such importance later on in the book. This is what I view as one of the bigger downfalls of the book. Otherwise, the characters seemed to be perfectly placed in the story.

Get To The Second Half

To be honest, most of my qualms are with approximately the first half of the story. It just wasn’t nearly as interesting as the second half. The second half of Edge of Perception is where the Paranormal meets Sci-fi and it was captivating.

Ron got an opportunity I think few would turn down if they met the qualifications. I knew I wouldn’t have turned it down. This opportunity was akin to what a job offer would be. The job was so intriguing that I wanted to be a part of it.

I went back and forth quite a bit when deciding how many stars I would give this novel. I loved Ron’s life story, the entanglement of the paranormal and sci-fi genre, and the second half of the book. However, I did not care as much for the first half of the book or the importance put on one of his romantic relationships. Once I weighed the pro’s on and con’s of the book, I decided that it was fair to give it 3.5/5 stars.

Ron Lewis is a firm believer in science. However, a curse that was placed on his family during the slavery days continues to plague since his early childhood. Ron was born in the 1960s and faces many struggles on top of the paranormal activity. Just when Ron thinks he has found peace, a tragedy strikes turning his world upside down. Soon after, a once in a lifetime opportunity allows Ron to use science to face his demons of the past which unleashes even more chaos. The question is, will he find peace amidst the chaos and will he finally be able to put his demons to rest?