Don’t you just love fantasy novels? I do, and that is the main reason I started reading the Hybrid Empire by Amanda Newman. It is a YA novel full of magic and adventure. I had a good mix of things I liked and disliked, so that is what I am going to talk to you about today. I will going over what the book is about, who the author is, and what my thoughts were as I read the book. Is this something you would like to read? Let’s find out! 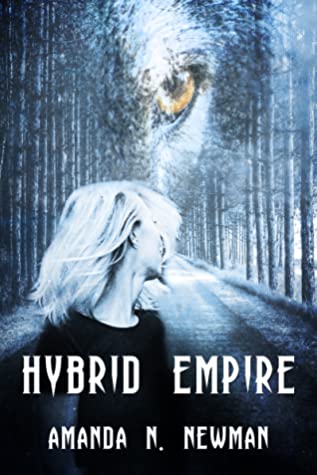 Hybrid Empire follows the story of a young teenage woman. Anika Litynska is the daughter of a poor Ukrainian family who was sent to Dark Forest, one of the most prestigious schools in Alaska. Just a few months after arriving, she learns that she may not be able to stay at the school. She gets a job to help pay for her schooling.

However, her boss Brayden ends up being a victim of her friends who have tormented him for months. While trying to stay in school and balance the act of hiding her connection to her friends from her boss and hiding her job from her friends, she is thrown into a world unknown by her but very real. Now on top of everything she is already balancing on her plate, she must learn to adjust to this new world while also learning the secrets of her family, making new allies, and gaining some enemies along the way. Will she be able to hold everything together, or will everything come crashing down around her?

The author bio is pulled from Goodreads

Amanda N. Newman is the author of the Hybrid Empire series and Children of the Outback. She was born in Burlingham, New York, and has been writing since she was a child. As a quiet person who didn’t make friends easily, while also battling social and general anxiety and depression, she found refuge in writing. She first started handwriting alternate universe style crossover fanfiction featuring her favorite characters from various video games, anime/manga, television shows, and other books, though she never shared any of these stories on any public forums.

As her stories became longer and more intricate, she branched away from and adapted her stories from fanfiction and into different subgenres of fantasy fiction. In her final year of high school, she wrote her first original novel Hybrid Empire, a paranormal fantasy about an international student trying to fit in at a fictitious boarding school in Alaska. She currently lives in Crawford, New York with her fiancé and a dog named Norman.

That’s a crazy good summary, isn’t it? When I read what Hybrid Empire was about, I was curious. I thought, man this could be a really great book!

There was a lot to take in but the book itself was really rather simple. I’m not saying it’s bad so don’t get me wrong! It just wasn’t as good as I was expecting it to be.

The Hybrid Empire is a book series actually so there is more that comes after this story. I think a lot of people could get into something like this, but there just wasn’t enough oomph in it for me. Let me explain why.

I actually thought the storyline was great which gives me reason to believe that Amanda Newman, the author, has the potential to write something amazing. The plot was anything but basic and something was always happening. There was never a moment where I felt like I knew what was going to happen but I never felt like I was on the edge of my seat either.

I found myself wanting more from Amanda Newman. I wanted the scenes to be longer or more detailed at the least. It was like I could just see how good the story could be. Perhaps that is what made me more critical.

So, I could imagine the world that Amanda Newman depicted. It was our world, just with vampires, werewolves, and more of the supernatural world intertwined. She did a decent job with describing the town.

Where I felt that the story fell short was when Anika was outside of the town. It was harder to imagine and see what Anika was seeing. I wish that more time had been spent on showing me what Anika saw.

I actually was able to imagine what all the characters looked like but I can’t say the same about the physical locations of the book. One thing that I will say was done wonderfully was the history of the supernatural world. It was primarily broken up into three sections and I felt like I understood each section well enough to comprehend why certain choices were made in the story. I hope that makes sense as I don’t want to give anything away!

I think I’m needy you guys. This is another part of the book where I just wanted more! As a reader, I really got to know Anika.

She wasn’t a strong character in the beginning but she was likable. I enjoyed seeing her grow as a person throughout the book. I liked that she was different from many of the main characters we see today.

She was skeptical, clumsy, and anxiety-ridden. She was kind and asked a lot of questions. Anika definitely feels like a real person.

My problem lies in the other characters. I wanted more depth and more dialogue. I felt like a lot of the book was spent in Anika’s head when some of that time could have been spent in the dialogue between characters so I as a reader could get to know them more.

As I read, I wanted to learn more about her father and mother and Brayden’s mother (and a couple of other characters but I won’t divulge their names). Perhaps these characters are written about in more detail in her second book of this series, but I would have liked to have seen more in the Hybrid Empire.

You know what I think? I think Amanda Newman shows such great potential. The reason I say this is because despite the faults I have mentioned above, I still liked the story.

I think that the problem though, is in her writing style. She wrote well and I was able to understand everything she was saying. But, it was simple.

Too simple for me. I guess the word I’m looking for is that it seemed like it was safe. More risks could have been taken in her writing, and some things could have been written more complexly.

A lot of YA readers would jump all over this story but it could be something that both teenagers and adults love. That’s what I wanted to happen when I read this. I wanted to be like wow, this book is a hidden gem and Amanda Newman is such a fantastic writer! Instead, I’m thinking that there is a diamond here, I just have to find it and clean it up a bit.

I found myself teetering between 3.5 and 4 stars and I have finally settled on 3.5/5 stars. The reason for this is because I think it could be a great story and I think many people would actually like this. It just wasn’t up to par with my personal standards.

I liked Anika as a character and I thought that the storyline was really good. If the worldbuilding had been in more detail and if the writing wasn’t as simple, I think this could have been a higher rating.

If you’d like to give this book a chance, you can get it by clicking on the button below! I think it would be great for anyone who enjoys the supernatural world and the YA genre.

Born into a poor Ukrainian family, Anika Litynska struggles to fit in with the wealthier students at Dark Forest, one of the most prestigious schools in Alaska. Just when it seems that she has made friends, she learns that she may not be able to stay at the school. Scared of failing her family, Anika gets a job to help her parents pay her tuition, but it comes at a price. Her boss has been tormented by her friends for months.

Now, Anika must hide her connection to them from him, while also keeping her job a secret from her friends. While trying to keep her life in order, Anika is thrust into a world that has coexisted with the human one for thousands of years. As she tries to make sense of what she’s learned, Anika meets new friends, powerful enemies, and uncovers a dark secret about her family. How long can she keep living a double life before everything is revealed? Who will get caught in the crossfire if that does happen?

Okay, so I think you know how I feel. Now I want to know from you! Have you read the Hybrid Empire before? Would you give it a read if you haven’t? What is the most important element of a book to you? My favorite element would probably be the characters. Check out my book review of Mrs. Poe where there are plenty of characters! Let me know your thoughts in the comments below!

Hi! I am a book blogger primarily. The aim of this blog is to help readers and writers alike. I also write the occasional travel related post. I am a nerd like you with a passion for neuroscience and learning. Hence, my love for books and the authors who write those books!