Lynn Cullen is one of my newfound favorite authors. I am a huge fan of historical fiction but I didn’t know who she was before this book. Mrs. Poe is a historical fiction novel that centers around an affair between Mrs. Osgood and Edgar Allen Poe. You may know of him for his still very popular poem, The Raven. I am a fan of his but I didn’t know much about his wife, Mrs. Poe, so I thought this would be a very interesting story. And it certainly was! Today, I am going to go over what the book is about, who the author is, and my favorite aspects of the book, Mrs. Poe. 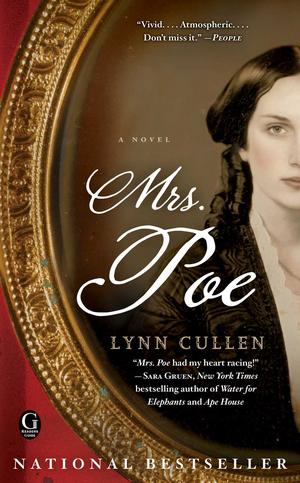 This novel of historical fiction by Lynn Cullen is a captivating depiction of an affair between Edgar Allen Poe (Mr. Poe) and Mrs. Osgood. Told from Mrs. Osgood’s point of view we get a look into the years 1845-1847. Just after Mr. Poe’s successful publishing of “The Raven” does the affair between the two poets begin. Mrs. Osgood must decide if her love for Mr. Poe is worth ruining her reputation all while maintaining a friendship with Mrs. Poe, her children, and dealing with her own twisted marriage.

The following information about the author was pulled from the authors website.

Lynn Cullen is a bestselling author for several historical fiction novels. Lynn grew up in Fort Wayne, Indiana, the fifth girl in a family of seven children. She learned to love history combined with traveling while visiting historic sites across the U.S. on annual family camping trips. She attended Indiana University in Bloomington and Fort Wayne, and took writing classes with Tom McHaney at Georgia State.

She wrote children’s books as her three daughters were growing up, while working in a pediatric office, and later, on the editorial staff of a psychoanalytic journal at Emory University. While her camping expeditions across the States have become fact-finding missions across Europe, she still loves digging into the past. However, she does not miss sleeping in musty sleeping bags. Or eating canned fruit cocktail.

She now lives in Atlanta with her husband, their dog, and two unscrupulous cats.

What Was The Best Part Of This Novel?

Each one was so different and they added to the book in a way another character could not. Some of the real-life characters may be people you have heard about, others not so much. I don’t like to keep all of my book reviews under one particular format.

Rather, I like to focus on what I view as the most important aspects of the book that I have read. Essentially, I write about what I think you should know. For my Mrs. Poe book review, that happens to be the characters that Lynn Cullen researched and created in her novel. She kept them varied and realistic. She made me curious about each person and how they must have been in real life.

While she loved him in the beginning, as a reader you can tell she no longer feels the way she once did. If there were no repercussions, I feel that she would have left him ages ago. And for good reason too!

Mrs. Osgood as a character does not make the best decisions all the time, but there is a likability to her that makes you root for her happiness. No matter how likable she is, the book showcases her struggle of choosing love and social suicide or staying married to Mr. Osgood and building up her career as a poet. It makes me wonder what I would have done had I been in her shoes.

I would not say such kind words about Mr. Osgood. There is not much good to say about him other than he is great with word choice and he must have been a wonderful painter during that time. I do wish that Lynn Cullen had added some likable characteristics to him.

It is evident that Mr. Osgood loves his wife and children but it is equally evident that they are not his priority. I found myself more supportive of the affair between Mr. Poe and Mrs. Osgood because of Mr. Osgood’s actions. Love changes the rules and while reading this book I could see this clear as day.

My word this is a difficult relationship to digest! Edgar Allen Poe is as famous today for his poems and storytelling as he was after “The Raven” was published. I found myself learning so much more about him than what I knew prior to reading this novel.

Lynn Cullen writes of him in a way that is both terrifying and captivating. Many characters in the book view him in a way I think many of us today picture him being. He is incredibly witty and has perfect, intellectual comebacks.

I found myself laughing many times at the remarks he made to people. However, another side of him is revealed. I would strike him almost as a hopeless romantic. I know, very surprising! The more I read the book the more I wanted to jump in a time machine and find out for myself.

Mrs. Poe is lesser well-known as she rarely leaves the house due to an illness that is masqueraded as bronchitis. Later you will find out that this is not the case. She is rather child-like and possessive but the further into the book I got the more I sympathized with her.

She is much more intuitive than she lets on as well. Mr. Poe is very loving and caring toward her but he does not love her in a romantic sort of way. The two have known each other since childhood and the bits and pieces that were revealed made me so badly want to read a story about their life prior to this novel; if only to know and understand their relationship more.

There is so much packed into the novel, Mrs. Poe. Your heart will ache, you’ll want to speak up for characters when they can not speak for themselves, you will laugh, feel frustrated, and at times you will feel puzzled.

I love a book that makes me think and one that shocks me. I am telling you now that there are some side characters that you will think you know, but you don’t. If you love romance then you will be captivated by Mr. Poes’ words and stolen moments with Mrs. Osgood.

If you love historical fiction like me, then I guarantee this book is for you. Any movie that is based in the 1800s I will watch, no questions asked. I only wish there was a movie version of this book.

I was surprised by one particular scene in this book. The importance behind the scene prevents me from telling you what happened so you will just have to read it for yourself. What I can tell you is that it had a thriller vibe to it that kept my eyes glued to the pages. It was almost as if Edgar Allen Poe had worked with Lynn Cullen to write out this scene. My mind was blown as I had not seen it coming…at all!

Book Review Rating and What I was Dying to Know

Mrs. Poe is a novel that sent me through a whirlwind of emotions. For this reason, I have to give it a 5-star rating. When I am writing a book review, I give the star rating based on what parts of the book I liked and disliked, and I pay attention to how captivating the book is. I believe my book review is the tell all of Mrs. Poe (without the spoilers).

During and after reading this book I am dying to know how much of it is real and how much of it is actually fiction. In the book, Lynn Cullen states that she researched the affair between Mr. Poe and Mrs. Osgood. I liken it to when you watch a movie that says it’s based on a true story and then once you’ve finished watching you look it up to see how real it is. Now, I want to do the same, if only to know what really happened.

This novel of historical fiction by Lynn Cullen is a captivating depiction of an affair between Edgar Allen Poe (Mr. Poe) and Mrs. Osgood. Told from Mrs. Osgood’s point of view we get a look into the years 1845-1847. Just after Mr. Poe’s successful publishing of “The Raven” does the affair between the two poets begin.
Mrs. Osgood must decide if her love for Mr. Poe is worth ruining her reputation all while maintaining a friendship with Mrs. Poe, her children, and dealing with her own twisted marriage.

Let’s Talk About It

If you like historical fiction, romance, thrillers, or even gossip, then this is the book for you.

Check out my other review of The Witcher: Blood of Elves!

10 thoughts on “Who In The World Is Mrs. Poe? Lynn Cullen Knows”