I love fantasy books. They are always full of action which makes them very entertaining. Phoenix of Fyre is no different. Today, I am going to be going over what the book is about, who the author is, and my review of the book. All of this joined with my star rating should help you to decide if this book is your next read. Let’s get started! 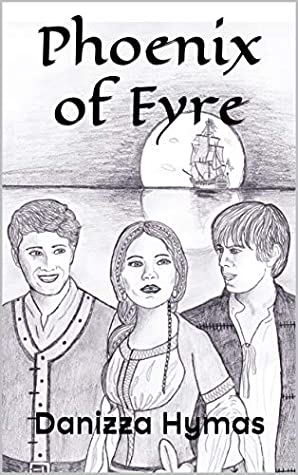 Phoenix of Fyre follows a woman named Phoenix from childhood into adulthood. She was taught to fight by her father who is a blacksmith but at a very young age, she loses her family due to an attack on the kingdom of Cicero by the Tuarentian nation. Phoenix discovers that not only is she a good sword fighter, but she is also a sorceress.

She is found and raised by gypsies where she befriends a mute named Monique. In an attempt to save her friend she is forced to expose her magic abilities. Because of this Phoenix and Monique must go on the run as criminals. They stumble upon a safe haven in Cicero where they become friends with a man named Ayden. The three become inseparable and together they discover the prophecy of the Lady Fyre. Daedalus is an evil sorcerer from 500 years ago and is back with a vengeance. It is up to Phoenix and her friends to save Cicero and fulfill the prophecy.

Danizza has a BA in Communications from BYU-Idaho. She enjoys soccer, volleyball, writing, sewing, and action/adventure flicks. Her favorite actor is the multi-talented Hugh Jackman. She lives in Rexburg, Idaho with her husband Tim and their nine children and three dogs.

This book was so much fun to read. It screamed fantasy the whole way through which I loved. Reacting out loud was not uncommon for me while I was reading this book.

I would agree with Phoenix’s actions at times and disagree with her at other times. I would even talk to my boyfriend about it telling him things like “I can’t believe she’s doing that” or “I don’t like what she’s doing right now”. He would just laugh at me but I really liked these moments because everything felt so real.

When I first started reading it I thought it was going to become a book that I didn’t finish but I pushed through. I always read the first 100 pages of a book before I stop reading it for good. Let me just say that I was hooked well before I hit that page marker.

But why did I think I wasn’t going to like the book? Well, it was the first couple of chapters really. I thought it was going to be unoriginal, a book where a teenager saves the world with all the stereotypes that come with it.

This book does follow suit with having a character be “the one” but she’s an adult for most of the book and there was actually a lot of originality to this fantasy novel.

If you are an avid reader of my blog, you will know that I never give spoilers. This review will be no different. However, I do want to talk about the plot with you without giving anything away.

This book is a long read sitting at 544 pages long. Most books that I read are usually between 200-300 pages. So, while it took a little longer to read I can’t say I was ever bored.

With some books, there are dry chapters or moments but that was not the case with Phoenix of Fyre. Everything I read seemed important or helped add to character development.

What I liked the most was there was a good mix of fast and slow moments. It wasn’t all fighting. There were real conversations between characters and even romance (Phoenix had her fair share of suitors).

I really liked that there were moments I wasn’t expecting. While reading, I was thinking that I knew what was about to happen only for something else to occur. I felt the book was very balanced and the author, Danizza Hymas did a great job at keeping the plot interesting the whole way through.

There were a lot of locations within the book. So I liked that Danizza Hymas had a map at the beginning of the book. She described each place really well.

I was able to picture it all but for those with less of an imagination, the map serves nicely. I also like it when maps are included in books because then I can see the world the way the author sees it. It’s like I get to see through their eyes.

I liked that there were different terrains, different ways of living, and different kinds of people under each kingdom. In real life, it would be this way so that made Danizza Hymas’ world seem all the more real. If I were to pick somewhere, I would choose one of two places. Either at the Amendaz Abbey, or in Isys. I’m not sure which.

The further into the book I went, the more characters were interlaced into the story. Like, a lot. There are sorcerers/sorceresses, pirates, normal humans, princes/princesses, rulers, a dragon, and a goat. I especially liked it when the pirates came into play even though it was a little hard for me to remember them all.

I found myself getting really attached to certain characters, so I thought I should tell you about my favorites. They are Phoenix, Ayden, Monique, Tannen, Paul, and Jaq (in no particular order). There were others that I really liked as well but these were my favorite.

My Favorite Characters In Phoenix of Fyre

Phoenix is the main character, so it probably wouldn’t be a good story if I didn’t like her. She is fierce and strong but can also be emotional.

Ayden is probably the best friend a person could ask for. He is loyal almost to a fault, extremely nice, and handy with a bow and arrow. If I could have him as a brother or friend I definitely would.

Monique is mute but where she lacks in speaking she makes up for in personality. I liked how well her movements and eye expressions were described so that I could tell what she was thinking.

Tannen was a super gentleman and handsome too! I don’t know why but I imagined him having a deep voice. If you read the Phoenix of Fyre, you’ll have to come back here and comment on if you thought the same!

Paul is the oldest of my group of favorites. He is very smart and always gave good advice.

Lastly, Jaq is probably the coolest one in the book. He is a spy and can blend in to any persona he may need to take on. I liked that he was quick-witted and equally quick at making decisions when its needed.

My favorite part was that this is the first book in a long time that had pictures. You won’t have to imagine what a lot of the characters look like as they are drawn into the book! It was cool to put a face to a name.

The book is written in third person which is probably best given how much detail there is. Plus, as a reader, I wouldn’t have been able to know about a lot of it was told only from Phoenix’s perspective.

There were some complex or out of the norm words in the book which I liked because some were new to me. I like learning new things and it isn’t often my lengthy vocabulary is challenged.

However, for the most part this is an easy read. It was very fluid and I always knew what was going on. The last thing you need in a detailed plot is getting lost or not understanding whats going on!

As you can see above, I am giving this story a 4.5/5 stars. It is so close but I had to take into account that the beginning didn’t quite catch my attention right away.

Otherwise, I really loved the characters, the plot, and the world it took place in! I think this book could have been a series or could be turned into a series. If it was, I would definitely read it!

Phoenix of Fyre follows a woman named Phoenix from childhood into adulthood. She was taught to fight by her father who is a blacksmith but at a very young age, she loses her family due to an attack on the kingdom of Cicero by the Tuarentian nation. Phoenix discovers that not only is she a good sword fighter, but she is also a sorceress.

She is found and raised by gypsies where she befriends a mute named Monique. In an attempt to save her friend she is forced to expose her magic abilities. Because of this Phoenix and Monique must go on the run as criminals.

They stumble upon a safe haven in Cicero where they become friends with a man named Ayden. The three become inseparable and together they discover the prophecy of the Lady Fyre. Daedalus is an evil sorcerer from 500 years ago and is back with a vengeance. It is up to Phoenix and her friends to save Cicero and fulfill the prophecy.

I really enjoy reading fantasy novels (see my other book review of a fantasy novel here!), especially when they bring something new to the table. Do you like fantasy reads? Would you read Phoenix of Fyre? What is your favorite fantasy book? Let me know in the comments below!