It’s great to be here today. I am grateful to Alexis for allowing me this chance to talk to you.

This is an interview with Adelbehrt, who is the protagonist in my historical fiction novel, Vengeance Of A Slave.

He was born in what is now Germany, but taken by the Romans as a slave.
Read what he has to say about his experiences. 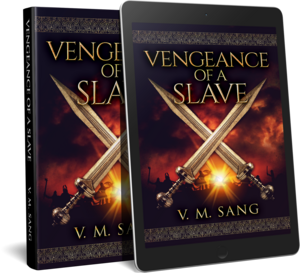 Forced to watch his father’s crucifixion and separated from his mother, orphaned six-year-old Adelbhert’s life forever changes when he is sold into slavery in Britannia. Years of servitude fill his heart with malice and he resolves to escape, determined to rescue those he loves and deliver retribution to the Romans who wronged him. But as new allies shed light on old perspectives, Adelbhert begins to question his path. Will he find true freedom, or allow his vengeance to consume him?

Interview with Adelbehrt from Vengeance of a Slave

Me: Good afternoon. Thank you for agreeing to do this interview.

Adelbehrt: It’s my pleasure. Thank you for asking me.

Me: Where were you born?

Adelbehrt: In a little village by the Rhenus, the river you now call the Rhine.

Me: Do you have any siblings?

Adelbehrt: Yes. I have a sister and had a little brother, too. I can’t remember his name, and I don’t know if he’s still alive. He was only a baby when I last saw him.

Me: Why was that? How come you last saw him as a baby?

Adelbehrt scowls. It was because of those Roman soldiers from Mogontiacum. (You call it Mainz.)

Adelbehrt: There had been a rebellion further north. I didn’t understand much of it as I was only six years old, and much has faded in my memory now. I do remember that the garrison at Mogontiacum went to put down the rebellion, and some men took advantage of them being away to attack the city.

Me: I don’t suppose that went down well at all.

Adelbehrt: No. They came across to our village to take their revenge. They lined up all the men and chose every tenth one for their punishment. My father was one of them.

Adelbehrt’s expression is unreadable. It is a cross between sorrow, anguish and anger.

Me: How did they punish them?

Adelbehrt puts his head in his hands and mutters something.

He raises his head, anger blazing from his eyes.

They crucified them. They cut trees and made crosses, then they drove nails into their flesh. They made us watch. Everyone in the village.

He puts his hands over his ears.

I can still hear the screams and smell the blood.

A tear appears in the corner of his eye, and he brushes it away.

My father didn’t have anything to do with the raid, but they killed him, anyway.

He smiles and holds his head up.’

But Father never made a sound.

Me: What a terrible thing to do to children. It must have left scars on all the little ones who were there.

Adelbehrt: It scarred me for many years, but my sister was too little to remember.

Me: What happened then?

Adelbehrt: A soldier saw me and Avelina. I think he was some sort of officer. He decided that we would be greatly sought after as slaves.

Me: Why was that?

Adelbehrt: He said it was because of our blond hair. There was nothing like it in Rome, so he dragged us away from our mother.

He pauses again and again. That mixture of sorrow and anger crosses his face.

Adelbehrt: No. They sold us to a merchant who took us to Britannia as presents for his wife and daughter. There I honed my hatred of the Romans and decided that I must somehow escape and get my revenge.

Adelbehrt: Let’s just say I did things to help.

Me: Thank you very much for talking about what must have been a very painful time for you. I appreciate it.

Adelbehrt: It was my pleasure.

Thank you, Alexis, for allowing me to come on your blog. It has been a privilege.

Get Vengeance Of A Slave Now!

Forced to watch his father’s crucifixion and separated from his mother, orphaned six-year-old Adelbhert’s life forever changes when he is sold into slavery in Britannia.
Years of servitude fill his heart with malice and he resolves to escape, determined to rescue those he loves and deliver retribution to the Romans who wronged him.
But as new allies shed light on old perspectives, Adelbhert begins to question his path. Will he find true freedom or allow his vengeance to consume him?

I was born in the north west of England in a little town called Northwich. There I went to school until I left to train as a teacher in Manchester,

where I studied Science, Maths and English.

I taught secondary pupils until I took early retirement.

I am married with two children and three grandchildren whom I am missing seeing during this pandemic.

I began to write fantasy just before I retired. My first books were from a Dungeons and Dragons scenario I wrote for my D&D club. It was supposed to be 1 book, but morphed into at least 4. The first 3 are published with a small independent publisher.

I decided to write Vengeance of a Slave as a foray into historical fiction, and enjoyed doing the research for it very much, and I’m now working on a book set in the time of the Vikings.

When not writing, I enjoy watching sport, especially football. I also do a variety of crafts, including card-making, crochet, tatting and painting and drawing. Hi! I am a book blogger primarily. The aim of this blog is to help readers and writers alike. I also write the occasional travel related post. I am a nerd like you with a passion for neuroscience and learning. Hence, my love for books and the authors who write those books!

2 thoughts on “Vengeance Of A Slave Character Interview”